For a long time of 1000 years, Lijiang Old Town (or Da Yan Old Town) has just been a hidden town where Naxi people, the minority ethnic group that takes most population of Lijiang city, spend their life with old but unique structure of wooden houses along the small canals running inside. Then, as China became open to worldwide, more and more places were brought to daylight, including Da Yan Old Town. It didn’t appear to be a sceneric site until the town gained a recognition of World Heritage by Unesco for its historical value. From then on, Lijiang attracted a variety of both international and domestic visitors not only because of its simple beauty but also the nickname “Eastern Venice”.

The Beauty of “Old But Not Oudated”

My first impression when taking the first step inside the town is that it is just like what I used to see on television. With red painted doors, curved stone roofs and red lanterns, altogether creates a picturesque scence that one may fall in love at first sight. All the working passages are made from stone, which enhance the town to be more natural and vintage itself. All vehicles (except for the government’s ones) are not allowed to enter the old town as it will damage the construction. The reason why Lijiang has been well known for the title “Eastern Venice” is deprived from the “little but pure and fresh” canals mapping around the area. As their water comes from melted ice on Jade Dragon Snow Moutain nearby, the quality of water is good enough without not much dirts and impurities that even algaes can grow and maintain in their best condition. Not having a wall surrounded thanks to the a rule of traditional chinese Feng Shui between the old town itself and the its past supervisor, the whole area is able to be seen from an above attitude at Wan Gu Lu pavillion or Lion hill (a special activities that many people claim to be the top to do in Lijiang).

Although the remaining houses all highlight the vintage feature of naxi cultural, what make you surprise is a “modern world” inside the town. Thousands of food stores, souvenir stall, restaurants, hotels and drum stores exist within the feeling of “ancientry”. In fact, the cutural aspects that reflect Naxi community’s life may not be seen there anymore but a commercialised tourism from the shops and government. But, to say that Lijiang is not worth visiting and admiring is wrong, the authentic town of the past Naxi group is not there anymore, but everything is still romantic and unexpectedly beautiful, particularly in the early morning. In a nut shell, Da Yan is getting rid of oudated common old town as it’s now the best way for people living there to earn money through tourism.

As described in a famous novel “The love story of Lijiang” written by a chinese author, which has become a trend to contribute to an increase of tourist in the old town, the town is extremely pristine and untouched in morning when shops are closed, just yourself and the quiet town beside the sound of water running. I spent the whole morning walking around wu yi street and the main sector of the town to feel the real romance of it. It gave me the feeling of a lonesome person wandering through the past to feel the unique hidden beauty. But with some couples I saw on the narrow stone path, it’s a true amour of two person in a relationship. They walked, sometimes look at the lantern, the girl’s head slightly get on the man’s shoulder, slowly step with an eye dreaming about their own house in Lijiang without any disturbance but just the mild sunlight and flowers there. How fascinating it is! The town’s appeal does come from another experience that you sit inside a coffee shop, listening to a ballad, streching your eyes to the water canals with colorful variety of fowers. Things are just like safe and sound, no more stress or pressure. The soul connects with the town to release all bad mood…

And when it reaches 10am, things are just another world that full of shops and people walking around

It’s undeniable that flowers does take a important role to create the elegance and charm of Da Yan. From a small alley to the main square, everywhere has flowers as a theme to the allure. Blossoms, begonias to pink trumphets, all dedicate to be a background that make Lijiang more romantic as ever. Enjoying the flowers is an activity that you should not ignore. From the end of March to early April is the best time of year to see numerous types of plants blossom. Each has their own color and scent but altogether make the old town a gem in tourists’eyes. The most beautiful place with as many flowers I used to see is the Yu He square with around 4-6 trees in half blossom. Along the water canals to The Big Water Weel is also a good spot to see them if you are lucky.

Another Lijiang At Night

If other destinations turn to be quiet and peaceful at night with mild lights and closed shop, Lijiang will amazed you to its differences. Nigthtlife in Lijiang does not just last a few hours but maintain lively, bustling and exciting until the very last hour of early morning. Obviously, this is awake bars and clubs inside the town that serve visitors without any idea of whether it’s late midnight or early morning. You may get your chance to see the traditional dance of Naxi girl in every bar, which is also an impression that separate Lijiang to other bars or pubs elsewhere. Sitting inside, watching funny and hihglighted dance, drinking Yunnan beer; there is nothing that can disturb you from the fascinating world of such activity.

But to say that there are just bars in Lijiang is totally wrong, tasty foods from foodcourts, souvenir shops, restaurants, drum shops or tea stores are all opening in evening and late at night. You may wander around the Wu Yi street looking for all pretty handmade gifts and try some flower cakes, a speciality of Lijiang. Sounds from drum shops does make this place somehow cute and charm. The most famous melody that is considered as a “theme song” is Xiao Bao Bei. Foodcourt helps their customers have a perfect dinner with variety dishes from not only Lijiang but Sichuan, Beijing…with a reasonable price. Outside, at Si Fang Square, a group of Naxi people in traditional custumes burn a big camp fire and dance around, attracting a lot of tourists to come and join without hesitation. Every corner is brighten up with colorful lights, another Lijang really exist at night.

Supposed that someone doesn’t feel like interested in such social life, they still can experience a quiet Lijiang at small streets that are not very far away from the center of Da Yan, but still a part of the town. There, with just lights from some shops, sounds of water from canals and hot steaming dishes for them to enjoy at night. It’s so peaceful that everyone loves to come back to Lijiang just because of it. Drinking a hot cup of tea watching the moon at night In a cool climate of early April, it’s just perfect!

Lijiang give me a whole different perception about the old town itself and the landscape of China that I used to think it’s an unreal feature in traditional chinese series. There are too many things in the town of Da Yan that one can not acknowledge and enjoy for just one or two days. That to say Lijiang in different seasons offer contrast feeling. I promise myself to comeback again in fall to understand more about Lijiang and for sure, to admire its unique charm when there are not flowers anymore. 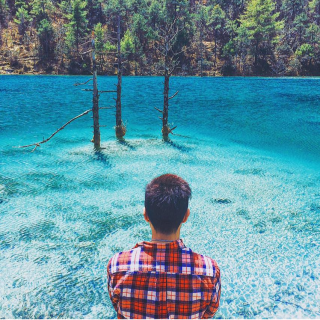